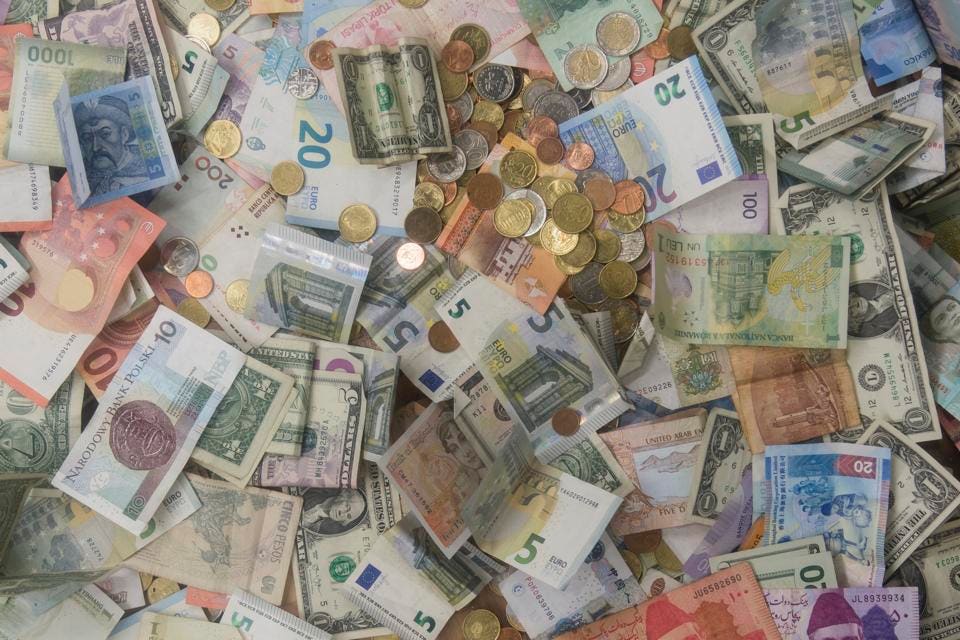 In a world with $7 trillion of government bonds that yield negative interest rates, one question still puzzles investors: who in their right mind is buying them? Why don’t investors buy higher-yielding US government bonds instead? The answer lies in the understanding of the mysterious “basis swap.”

The basis swap is an over-the-counter (OTC) derivative actively traded between large banks and their institutional clients. These swaps allow investors to hedge their assets and liabilities from currency fluctuations. The function of the basis swap is best explained through an example.

Assume you are the CIO of a Japanese Pension Fund. You have long-dated liabilities and you want to purchase 10-year bonds to add both yield and duration to your portfolio. You can invest anywhere in the world, but you have some overall restrictions on how much credit risk and currency risk you can take.

What are your options? The default choice is probably 10-year Japanese government bonds (JGBs) since there are no restrictions on how many bonds you can own issued by your own country. Unfortunately, the yield for these bonds is 0.0 percent. You decide to look elsewhere since just getting your money back without any interest is not going to help your pension fund achieve its target return. You choose to look globally instead.

Maybe there is an opportunity in Italy? 10-year Italian bonds offer a juicy yield to maturity of 2.52 percent— much higher than the zero return on JGBs. The only problem is the credit. As the CIO, you are worried about having too many bonds in your portfolio that could get hurt in a credit crunch. Your pension fund liabilities are discounted using a rate that is heavily influenced by JGB yields. If JGB yields fall, and your Italian 10-year bonds move in the opposite direction, the funding status of your pension fund will get hurt. OK. Scratch Italy. What else can you buy?

The next obvious choice is US government bonds. There are no current credit concerns and Treasuries have historically been correlated to JGBs. That’s good. And the best part is that 10-year US government bonds yield 2.75 percent. The last detail you need to consider is the currency risk. There is a limit to the amount of non-yen assets you can hold so you will need to hedge the currency risk if you want to buy US Treasuries. That is the role of the basis swap.

Basis swaps can get a little complicated, but think of them as an exchange, or swap, of one currency for another for a specified period. For example, you give a pile of yen cash from your pension fund to a bank in exchange for the equivalent amount of US dollars, and in 10 years, you and the bank do the swap again for the same amounts. In the meantime, you pay the prevailing 3-month USD LIBOR rate, and the bank will pay you the 3-month JPY LIBOR rate. The bank will also add or subtract a spread to the JPY rate depending on flows in the market (this basis swap spread is described in more detail below). 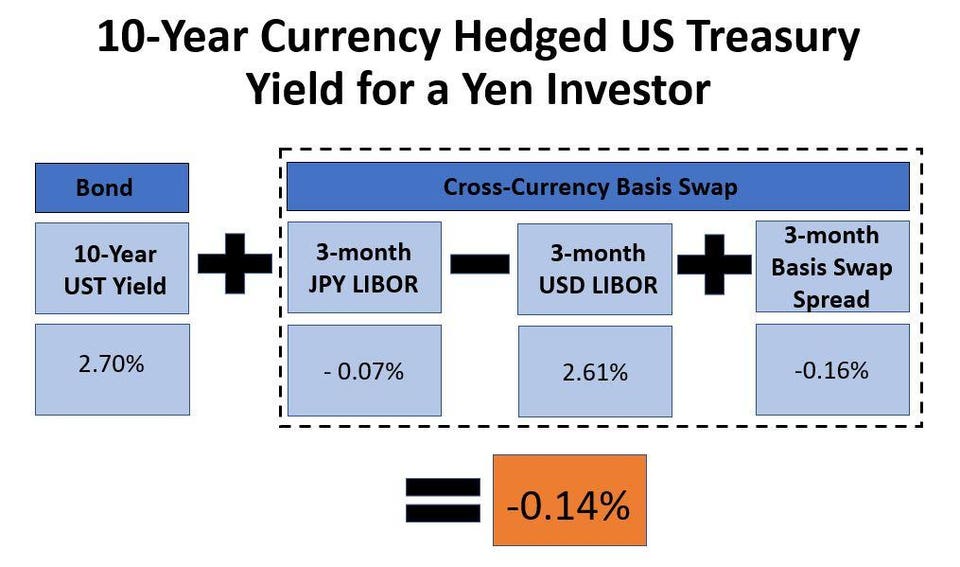 The current 3-month basis swap spread is -0.16 percent. Now you have to do some basic math: Take the yield of the US bond, add the JPY LIBOR rate, subtract the USD LIBOR rate, and add or subtract the spread. After you add it up, your pension fund would end up with a yield of -0.14 percent— not so attractive. You would be better off buying the JGB!

Two variables drive your net yield: the slope of the US government curve (i.e. the spread between 3-month LIBOR and the 10-year rate) and the negative spread on the cross-currency basis swap. The current flatness of the US Treasury curve makes long-dated US government bonds relatively unattractive to foreign investors. The negative spread on the basis swap compounds the issue.

So, what determines basis swap spreads? There are many factors, but it can be summed up simply as global supply/demand for one currency relative to another. That demand is influenced by central banks, corporate bond issuers, international investment flows, etc. The basis swap spread, positive or negative, is the result of these flows.

Sometimes the basis swap is a cost to investors. It can also enhance returns. For example, last December, a US dollar investor could buy a JGB 3-month government bill at a negative interest rate and end up with a security that yielded more than 70 bp ABOVE 3-month US T-Bills. The negative basis swap has been a disadvantage for yen investors looking to buy US assets; however, it is an advantage for US investors that buy yen assets.

Basis swaps help answer the question about why corporate issuers don’t borrow trillions of dollars at negative interest rates, convert the proceeds to USD, and invest them in higher yielding US assets. The currency risk is massive. To hedge the currency risk, they do a basis swap. The basis swap can take out most of the economics or enhance returns such as in the JGB example above.